FREE SHIPPING ON US ORDERS OVER $100 Amazing goggles, my 2-year-old chihuahua french bulldog mix is super happy with them. We got her as a rescue and she only has one eye so I was looking for something to protect her eye from the brush when we go on walks. I tried to find a Rexspecs substitute that wasn't so expensive but there wasn't anything with even a similar field of view or quality. Finally, after a month or two of procrastination, I decided to take the leap and buy a pair. I ordered the extra small size even though she has a rather broad forehead. They came yesterday afternoon, fit perfectly and believe it or not she has already let me strap them on her without the lens in. These are high-quality goggles and are very similar to my alpine skiing goggles. I recommend you get a pair and be patient training for I have a very easy-going mutt. Thank you Rexspecs.

We miss our signature PINK ones, but our new PURPLE ones are still pretty cool 💕.

Well, we are off to hit the trail! 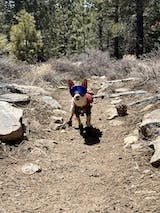 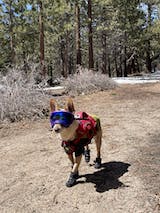 These goggles are working perfectly to protect my fur baby's eyes while riding in the basket on the back of my tricycle.

My dog Dobby's eyes are sensitive to the sunlight and he always squints when he is out in bright sunshine. Not only is this uncomfortable for him, but I also worry about permanent damage to his eyes from the unfiltered UV rays.

I tried other solutions: doggles (look like swim goggles--they were uncomfortable and he wouldn't keep them on), hat with bill (the bill wasn't long enough to provide any shade to his eyes, and it wouldn't stay on), doggie sunglasses (didn't fit right and wouldn't stay on). See the pattern? Dobby has a tiny head and face but a long snout, and it's really hard to find anything that fits him correctly.

I finally stumbled onto Rex Specs and thought they looked promising. The fit and comfort features seemed like they might work for him. I ordered XS. He was borderline between XS and S, but I looked at the picture examples of other dogs in both sizes and I felt like the XS would work better.

The Rex Specs arrived nicely packed and in perfect shape. Amazingly, the straps were already adjusted for a perfect fit--I didn't have to change anything.

I followed the advice on the training video to take it slow by introducing Dobby to them a bit at a time. When I got to the point of putting them all the way on, Dobby didn't resist at all. I started with the clear lens, and later graduated to the darker lens.

When we first walked with the Rex Specs on, he pawed at them a couple of times, but I gently corrected him, and he stopped. His reaction didn't seem to be from discomfort, but rather it was from the unfamiliar sensation of wearing the specs. He walked much slower in the beginning and looked at things as if he were seeing them for the first time. I'm sure everything looked different through the curved and tinted lens.

Now that he's used to the specs, he isn't bothered by them at all and he actually seems to enjoy wearing them. No more squinting! I feel like his eyes are much better off being protected from the harsh rays of the sun.

But the funniest thing is, we get stopped by so many people who admire the Rex Specs and want to know about them. Everybody thinks they are so cool! Dobby does look very cool in them and he struts like he's cool. He is the studly King of Cool!

One dog owner in the neighborhood has already ordered a pair for her dog who also has squinting issues. There may be a few more converts around here before long.

I really can't say enough about the great design and the quality materials and workmanship that go into the Rex Specs. I wish I had found them sooner, but honestly, I probably had to go through the whole trial and error process in order to truly appreciate the Rex Specs as the ultimate solution.

Thanks for making such a great product! 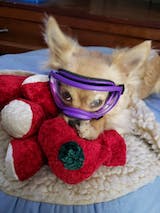 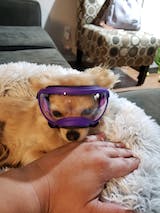 Measure the circumference of your dog's head at it's largest point (just in front of the ears and under the chin).