I bought the large size for my previous Airedale Terrier. My current male, Diggs, is a bigger dog.

Checking the web site for sizing information, I saw that I would need the extra large size.

We're going through the process of accustoming Diggs to them. 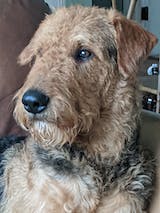 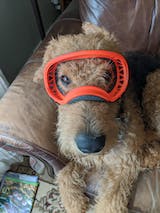 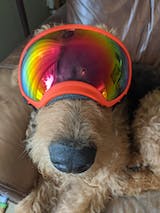 Got these for my dog with droopy under eyelids. The goggles keep his eyes protected from on dusty ATV rides and he is happy to wear them. My only complaint is the clear lens (the only one used so far) scratches very easily and the lens is pretty scratched after only 3 rides. I realize the dog doesn't take care not to scratch the lenses, but I do and take them off of him before he gets out of the ATV so he isn't running around in them. But the main function of keeping dust out is achieved and I doubt the dog cares about the scratches. I do love the Rex Specs. They fit well and seem comfortable to the dog.

D
D.M.
Living in the woods

We live in the woods and spend an average of 2 hours a day exploring. Copper ripped his cornea a month ago! It has repaired itself with medication
. now our Rex goggles are our regular gear. It took a couple days to get comfortable. He runs though the under brush & thickets.. I don't worry about his eyes. Thank You.. need new clear lens.. they are getting scratched... but they're tough.
Thank You.. GREAT product
Debbie & Copper

Our 18 month Rottie LOVES to put his head out of the car when we ride, and I've been worried about his eyes getting injured. When I found RexSpecs, I was excited, but he's super wild and lively, so I was afraid that I wouldn't be able to train him to wear them. On the contrary, the "how to" videos were really helpful, and most importantly, the support staff was phenomenal! Without them (particularly Micaela), I know I would have given up, but each email and phone call was super encouraging and nobody got irritated at my dumb questions. Our pup loves his Specs, and he gets SO many admirers! Whether we're stopped at a light or on the road, people keep taking pictures of him! Not only is he now safe, but he's also way too cool!