We hace not received the package…. Don’t know why but we have not received it. UPSP has been of no help trying to locate it and I’ve asked for your help a few days back with no luck. So what can we say about the goggles? Well nothing.

These goggles are great. We are having issues with our Boston terriers eyes and we got the goggles to help keep her protected. Due to her being a smarty she is able to paw and shake them off not sure if I would recommend the specs for medical issues. More for protection when eyes are
I’m contact with elements outdoors and the effort to train the dog to keep them on is a
Long process in our case which we still have not worked out.

These goggles are wonderful. I’m our situation I hope they’ll work. I had the ophthalmologist vet fit them. Our little Boston Terrier has had a flap on one eye due to perforated corneal ulcer. He got a scratch on other cornea that quickly ulcered about 90% but no perforation. It’s healed but we have a larger puppy that he always plays with. I’ve had 3 bostons it this one, by far, has the flattest nose. The goggles barely rest on it. Still working on training him to leave specs alone.
To

Frankie loves them, knows fun is about to happen when she puts them on. 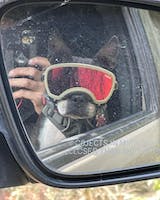 A
Amanda (Charleston, US)
Not great for Boston terriers

Since these were labelled as being designed for short-faced dogs, I thought I would try them out. My Boston terrier has a longer than average snout for the breed, but unfortunately these still don't work. There is not enough distance between his eyes and the lens, so sometimes his eyeballs literally press against the glass. (It would help if the goggles had greater depth or the glass was domed). The straps do adjust in a lot of ways, but it boils down to two options: have them a little loose, and they can slip against his eyes as he runs, or tighten them enough that they don't slip, but they are permanently against his eyeballs. Neither is acceptable. Also, as other reviewers have mentioned, when the goggles are cinched tightly, it prevents the dog from opening his mouth wide, which seems like a major design flaw. It does make fetch more difficult.

I should have returned them, but it was a slow process getting him used to having the goggles on his face, and I thought that I would be able to resolve the issue with strap adjustments once he was comfortable with having them on for more than a few seconds. (The photo is from the early stages of training, and I did manage some improvement on that fit). I'd say the goggles are worth trying, but if they seem too close to the eye when you hold them up to your pup's face, just send them back straight away. 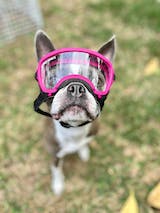