The goggle is very helpful for my dog's eyes :) 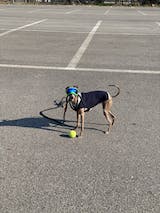 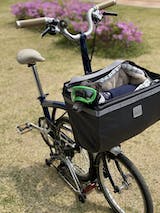 Great Protection for my dogs eyes.

Bubba is my most faithful passenger. But I've never been able to find any goggles from which he could not rscape, until now. The size and design of the straps works perfectly for my creative poodle. Once he figured out he cannot push these up on top of his head, or twist them around or under his neck, he has stopped trying. I think it also helps that he has much better visibility! Thank you REXSPECS for including small dogs to your inventory! 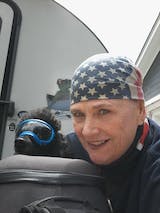 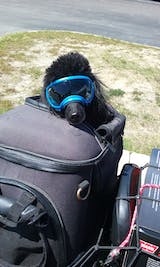 Rex Specs were the perfect solution for our little Papillon to help protect his eyes while we go for bike rides! 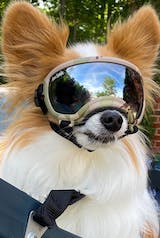 A
A.E.
Miss Molly is Rockin' her Rex Specs!

Molly just had to have her own Rex Specs when she saw Crusoe the Celebrity Dachshund sporting his. Molly got her Rex Specs for her 14th birthday. She wasn't certain they were a good idea after all but realizing she was suddenly the Babe of the Bike Path - she wants to wear them all the time! They fit her right off-no adjustment necessary. Only occasionally will she try to re-position them with a shake of the head or a roll in the grass. It took probably 2-3 walks before her initial reservations faded away! Molly is really pleased that she can dive into the weeds without her eyes getting poked and oh-the relief the Specs give her from the bright lights (sun) when she's out there strutting the catwalk (bike path-LOL!). Molly is developing a cataract in one eye and her mum thought the Specks might give her some relief as along the Mohawk River, which runs east-west, there are areas where the sun is directly in view. Molly may be starting a new fad around here because she has been stopped and questioned several times about her mod eye wear by Boxers, Labradors, Poodles, a Chowbrador, several Goldens, Doodles, Bostons, Pitties, Chiwieners, Mixers, and even humans. Molly in her Specs has been described as looking like a super heroine, sexy skier ready to conquer the slopes, and even a Hollywood starlet! On a serious note - the Rex Specs are nicely made, perfectly fit Molly, a svelte 11 pound senior Miniature Dachshund with an active lifestyle. We both are very pleased with them!!!! 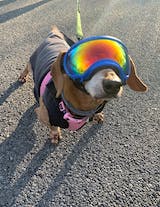 *Designed for dogs with a wide, flat face i.e. Boston Terriers
If your dog is between sizes, select the larger size: This will insure the most functional fit and optimal view of field.