I hunt with or behind a HARD charging lab. She's got an unbelievable drive and slows down for nothing. That's all great, but it left her with a lot of scratches and cuts around her eyes.

Thanks to the Rex Specs, she can go as hard as she wants and I'm not worried about winding up with a blind dog or a massive vet's bill because a stick finally caught her in the eye.

I would have rated it 5 stars but the clear lens that came with the goggles fell out somewhere in the woods after only 3-4 hunts...I know replacements aren't terribly expensive, but I would have hoped the first one would have lasted a bit longer. 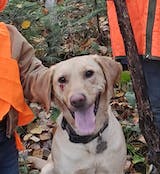 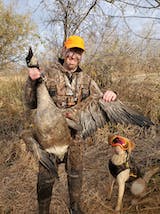 Tried many goggles till we found rex specs. Only ones our dogs won't take off. Clyde only has 1 eye, so its important that he gets the best protection and visibility. Rex specs gives him both!!!

Just got them and are working on training and tolerance. Seem to be very high quality. We are struggling a bit with figment (flap ears vs prick ears) but it could be 💯 me and not the design. Will update review as we get more training g in and actually hit the fields! 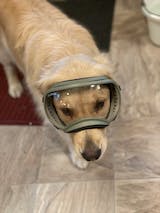 Best quality and design for my motorbike rev-head Corgi - Bonnie! No pressure on tear glands and plenty space for eyes - I can see why Bonnie loves these!